Bel-Air S1 E5 Will Smith All Over Printed Blazer Jacket 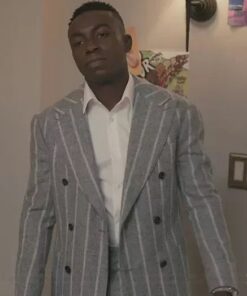 There is no doubt that the lavish lifestyle of rich people has always been the center of attention around the world. Not only that but their grand lifestyle is also the topic of attraction for films and Tv shows, which a lot of people like watching. Viewers can get a sense of things by seeing what goes on in the extravagant lifestyles of these wealthy people and the luxury that money can purchase.

The lives of these folks appear to be great and all at first, but there is a lot more going on in the background. The TV shows fill this gap by allowing us to see a more authentic side of these wealthy people's lives, which are often less ideal than they initially appear to be. Bel Air is the only show that features that in its plot and stands out even though are many shows these days.

This show is a reimagined version of Fresh Prince of Bel-Air, albeit with a few minor changes. It shares the same plot as the original show but in modern-day America. The story of Bel Air features the transformation in the life of an African-American and street-smart boy named Will Smith when he moves to Bel Air.

He was born and raised in the mean streets of West Philadelphia but got a chance to go live with his relatives in the gated mansions of the rich neighborhood of Bel Air. But Will finds it difficult to adjust to the grand lifestyle of one of LA's richest suburbs. He must deal with the conflicts, emotions, and preconceptions of a world far that is different from the one he came from. The show became a hit upon its premiere on February 13, 2022, and stars Jabari Banks as the main protagonist, Will Smith.

Bel Air has been a hit no matter how you look at it. And despite the fact that it is a drama show, it showcased some gorgeous clothes. The outfits of the Bel Air cast astounded viewers around the world. They have offered excellent dress ideas to fashion enthusiasts all throughout the world. The numerous options for Bel Air Costumes allow everyone to obtain some inspiration.

Blair Levin, who designed the show's costumes, is deserving of recognition for her efforts. The clothes that the cast wore were created to reflect certain aspects of their characters. The popularity of Bel Air was greatly influenced by its clear sense of style. In fact, it resulted in one of the show's high points. The cast's attire was perfectly designed to bring the figures to life. Fashion designers praise Blair's superb job for the show's attire.

Bel Air Tv Show Cast Vests are a good and lightweight alternative to jackets if you wish to wear sleeveless clothing. You can look like a true hero by wearing this chic Orange Satin Bomber Jacket of Bel Air Will Smith. Apart from that, you can wear this stunning Blazer of Jimmy Akingbola Bel Air. All of these clothes are made from the best material so that they can represent you as a fan of Bel Air.