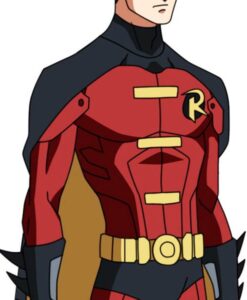 Batman Begin is one the most famous and favorite superhero based film which was directed by Christopher Nolan and produced by Charles Roven, Emma Thomas. It was released in 2005. The main character of the movie Bruce Wayne portrayed by Christian Bale wears a black leather jacket with a Batman Logo. As the dressing is an art; William Jackets provides you with the best outfit that reflects your personality. It’s not about the dress you wear it’s about the life you lead in that particular dress. So, be ideal and choose Batman Begins Logo Dark Crusader Black Leather Jacket.

This jacket is made up from a high-quality material which provides the casual look with best for regular wearing. Batman Begins opened with 8-year-old childhood friends, Wayne and Dawes, playing a game. While playing the game the young boy fell into a good shaft. He screamed as he was swarmed by the bats. This became a habitual nightmare for the 28 year’s old Wayne, a young scion of a wealthy family. As a boy, a young Bruce Wayne who is the main character of Batman Begins watched in horror as his millionaire mother and father have been slain in front of his eyes.

The shooter named Joe Chill who was later arrested but young Wayne blamed himself for the death of his parents. A shock which led him to become obsessed with revenge but his hazard is cruelly taken away from him by means of destiny. After disappearing to the east in which he seeks recommend with the harmful but honorable ninja cult leader known as Al-Ghul, he returns to his now decaying Gotham metropolis overrun by using organized crime and dangerous people manipulating the gadget while the enterprise he inherited is slowly being pulled out from under him.

The invention of a cave beneath his mansion, and a prototype armored fit leads him to take on a brand new persona, one so one can strike fear into the hearts of men who do wrong - he turns into, Batman. Inside the new guise, and with the assist of growing cop Jim Gordon, Batman units out to take down the diverse nefarious schemes in motion by individuals together with mafia don Falcone, the twisted drug supplier Jonathan 'the scarecrow' crane, and a mysterious party that is pretty acquainted with Wayne and waiting to strike whilst the time is right. Overall Batman Begins is the best movie with the character of Batman who works against the people who do wrong. Show your love by having this Batman Begins Logo Dark Crusader Black Leather Jacket.